Sure, I love looking at them, especially odd or fantastical maps, I admire people who enjoy creating maps. But I'm the only Dungeon Master I know who kind of loathes sitting down to make my own campaign maps. My last long campaign suffered greatly from this; I wish at some point I'd actually sketched out the area and how it related to the rest of the mainland.

It's mostly that I'm not very good at it, and I'm excessively perfectionist. I especially hate coastlines, because I can never, ever, ever draw something that looks right to me. I can do okay with terrain, as long as I keep telling myself that it doesn't have to be "accurate" and the players will never see it, but coastlines just drive me crazy. Which is a bigger problem than it should be, because while I hate coastlines, I love pirates and underwater adventure.

So for my next campaign, I'm using Google Earth and a ruler to roughly copy real coastline, so I can skip all the coastline stuff and skip right to filling it in with craziness. I'm mostly snagging using Indonesia, because it's all island-y, has a little more scope than the Caribbean, and is right near an awesome lost desert continent, and also because I found the island of Sulawesi: 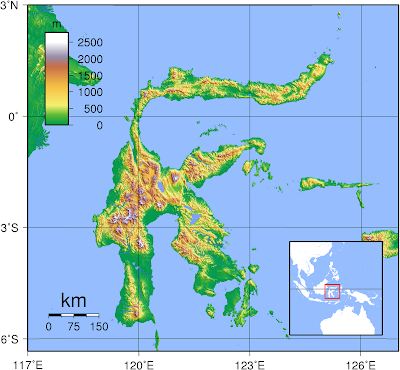 Which, being much cooler than anything I could possibly come up with, is the starting area for the campaign. Or rather, an island off the southeast corner of it is. There's a good chance the players won't have the time to explore enough of it to see how crazy it is, but at least this way if they decide to sail all the way around the edge of it they'll get something kind of neat.
Posted by Natalie at 11:00 PM