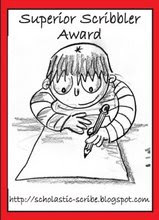 So Sirlarkins, author of the most excellent blog The RPG Corner, has gone and given me the Superior Scribbler Award, which is pretty neat. A bit mind-boggling, perhaps, but very nice of him. He writes:

To me, Odyssey is a living example of the "go play" attitude--seems she's always plotting or scheming about a new campaign to map out or a new system to take a creative monkey wrench to. I can definitely sympathize. Yet, here's the thing folks--she manages to run games too! Too many would-be GMs, I think, fall victim to what I like to call the "Stanley Kubrick syndrome," getting caught up in the perfectionistic quest to perfect every set, shot, part, and line of dialogue. Sometimes you just have to grab your camera and start shooting. Odyssey shows us you can have your cake and eat it too.

Which, to me at least, is illuminating. I don't give a whole lot of thought to what this blog is "about." It tends to be "about" whatever dang fool thing popped into my head most recently. So the suggestion that there is, in fact, something resembling topical coherence in there--well, it's interesting to me, at least.

But the point of the Superior Scribbler award is that those who receive it get to pass it on to five other blogs who they think deserve it. I happen (as others have noted) to think that there are a lot more than five blogs out there that count as "exceptional," since I read a lot more than five. On the other hand, a lot of those are gaming blogs, and considering the speed this thing is already sweeping through the game blog-o-sphere, most of the good ones should get picked up by someone. So I figured I'd pick out the five best blogs that aren't part of our little cross-linked universe that still ought to have some interest to gaming folks.

Fraggmented: John Seavey writes about a lot of things, most of them geeky. Of particular interest to me is his series on storytelling engines--their creation and maintenance, as well as the various things that can go wrong with them. He starts out mostly writing about comics, but has since expanded to just about everything; movies, TV shows, books, you name it. Even beyond the purely academic (or even writerly) interest I'd have in such a topic, there's a lot of points to consider when setting up a campaign, since those are often built on long term story-generating status quo's themselves.

Square Mans: Mathew Colville is another eclectic blogger -- but he does a fair amount about gaming, of both the tabletop and digital varieties. And he doesn't just write about them--he analyzes them, writing long, intellectual posts whose intensity just about makes up for their infrequence.

I Waste the Buddha With My Crossbow: Dr. Rotwang writes about GMing! And the eighties! He's the guy who got me in to Traveller, and he writes a lot about not taking this GMing stuff so dang seriously, which is a good antidote for the kind of compulsive perfectionism all those GMing advice websites, great as they are, can engender. I know I've kind of broken my "no blogs that other people I read will probably hit" rule, but dang it, this was one of the very first blogs I started reading back when I first started getting into this crazy sub-hobby, and it's great.

Zompist's E-Z rant page: Now, what's really amazing is Mark Rosenfelder's main website, where Virtual Verduria and The Language Construction Kit reside, but it's not a blog, and his rant page is pretty spiffy too. He's a conlanger and world-builder par excellence, so there's a fair amount of advice and information regarding those two topics. No comments allowed, sadly, but he does write about economics and politics so it's probably just as well.

A Villain's Life: Not in any way gaming related (unless you're running a superhero game, I guess) Doctor Cataclysm's personal weblog is just fun. Cataclysm makes for an entertaining narrator, and where else are you going to see catfish men trying to destroy the earth with crystal resonance and an android from the future with a baked goods subroutine gone awry.

And, finally, the rules: